Prove a tight robustness guarantee in $l_2$ norm for smoothing with Gaussian noise.

workaround: look for robust classifiers that are not neural networks 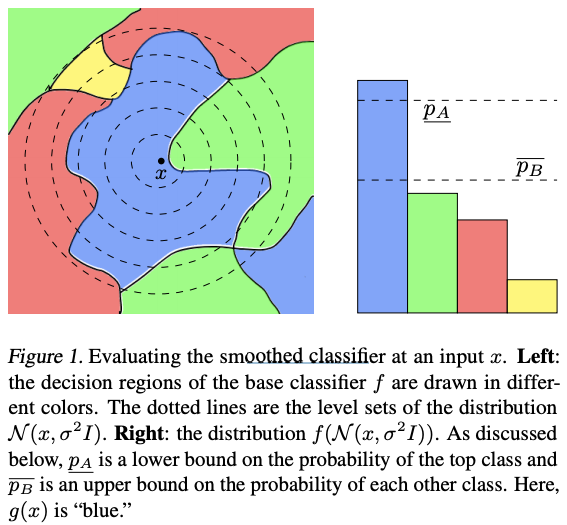 Randomized smoothing: can transform any arbitrary base classifier $f$ into a new “smoothed classifier” g that is certifiably robust in $l_2$ norm. For any input $x$, the smoothed classifier’s prediction $g(x)$ is defined to be the class which $f$ is most likely to classify the random variable $N(x, \sigma^2I)$ as. $g(x)$ returns the most probable prediction by $f$ of random Gaussian corruptions of $x$.

The smoothed classifier $g$ will also possess a desirable property that the base classifier may lack: one can verify that $g$’s prediction is constant within an l2 ball around any input $x$, simply by estimating the probabilities with which $f$ classifies $N(x, \sigma^2I)$ as each class.

The higher the probability with which f classifies $N(x, \sigma^2I)$ as the most probable class, the larger the $l_2$ radius around $x$ in which $g$ provably returns that class.

This paper proves the first tight robustness guarantee for randomized smoothing, and suspect that as-yet-unknown noise distributions might induce robustness to other perturbation sets such as general $l_p$ norm balls.

Advantage of randomized smoothing: no assumptions about the base classifier’s architecture; scale to large networks

$g(x)$ returns the class $c$ whose pre-image {$x’ \in R: f(x’)=c$} has the largest probability measure under the distribution $N(x, \sigma^2I)$; $\sigma$ is a hyperparameter controlling a robustness/accuracy tradeoff.

Large R may imply that:

Although he certified radius does not depend explicitly on the data dimension $d$, images in higher resolution can tolerate higher levels σ of isotropic Gaussian noise before their class-distinguishing content gets destroyed. In high resolution, smoothing can be performed with a larger $\sigma$, leading to larger certified radii.